The thrust areas of basic research in BAPP section are waves and instabilities in multicomponent plasma and in dusty plasma. In multicomponent plasma the recently discovered Peregrine soliton, the so called prototype of the rogue wave in the ocean has been investigated in its semi localized forms. In dusty plasma nonlinear wave phenomena associated with low frequency dust acoustic waves and nonlinear structures such as Mach cone, vortex formation etc., which are associated with dusty plasma flow has been a subject of intense investigation. Very low density plasma with near ionospheric plasma condition has been experimentally realised using a magnetic filter. The near ionospheric plasma is mixed with negative ions to study the sheath modification.

In the applied plasma section, the research is engaged on the development of Proton Exchange Membrane Fuel Cell (PEMFC) and efficient electrode assembly with the incorporation of nanostructured catalyst using plasma. Cold atmospheric pressure plasma systems have been developed for various applications including deposition of composite polymer films with selective properties on metal surfaces as well as water purification. A liquid plasma discharge reactor has been developed and utilized it for the synthesis of nanomaterial in water/ionic liquid. The synthesis process has the advantage of not using any highly toxic reducing agent. The liquid plasma reactor has potential application in synthesis of nanomaterial with tuneable optical and structural properties. A survey to develop a business model on IASST patented plasma coating process on bell metal industries of the country has been initiated with financial support from DSIR, Govt. of India.

The nonlinear evolution of wave envelope in a nonlinear dispersive medium is described by the Nonlinear Schrodinger Equation (NLSE) leading to the formation of well-known envelope soliton. NLSE also admits another type of localized structures and there has been great interest in those spatially and/or temporally localized structures often called as breather solutions in many diverse fields, e.g., fiber optics, hydrodynamics, plasmas, etc. Experimentally second order ion acoustic Peregrine breathers in multicomponent plasma with a critical concentration of negative ions has been observed. In plasma, this is the first report on the observation of second order Peregrine breathers which appeared in water wave experiment for the first time in 2012. 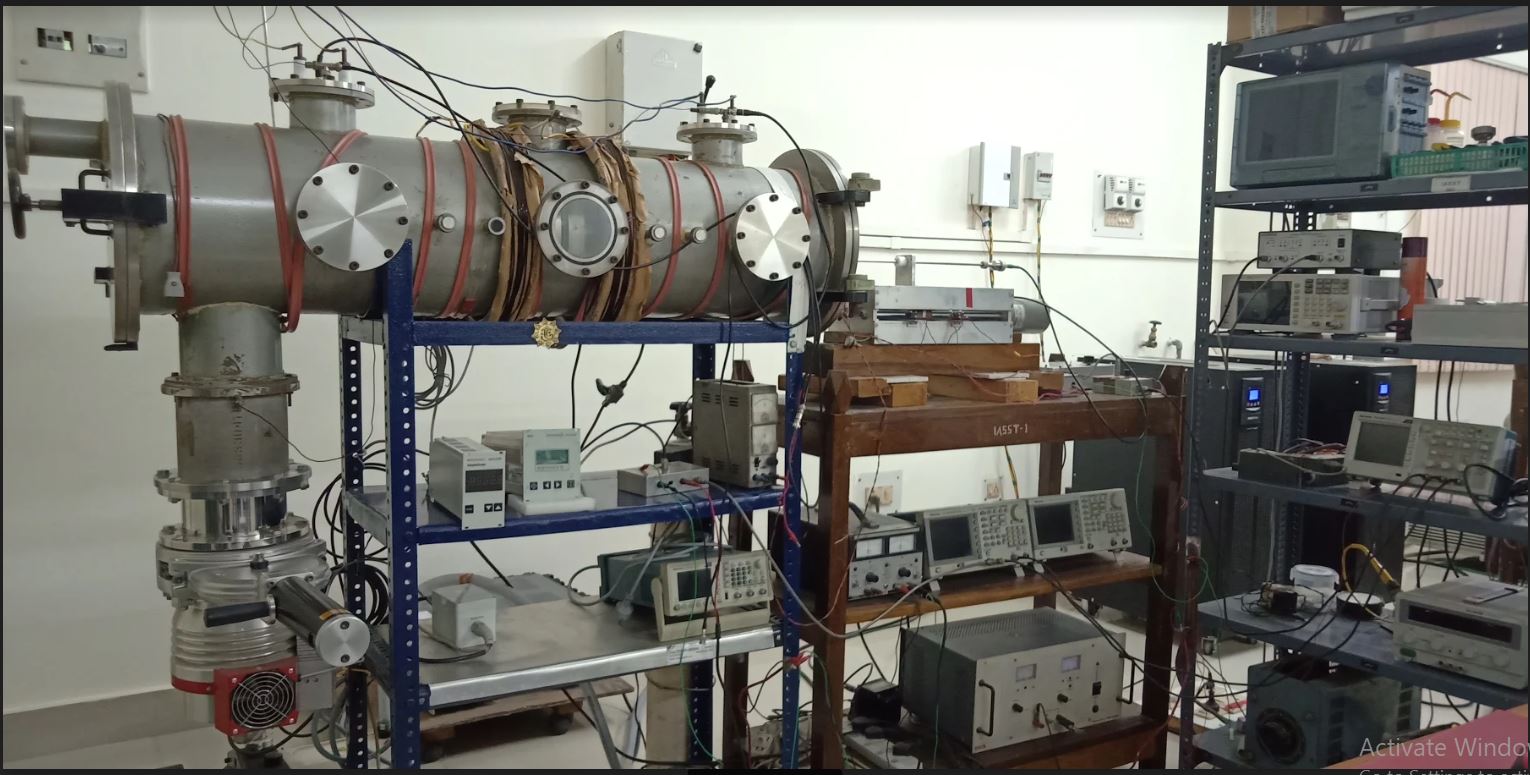 Device for experiment on near ionospheric plasma

Sheath studies in Low Earth Orbit (LEO) plasma have gained significance over the years. One of its applications is to understand the spacecraft/satellite interaction with LEO plasma. The interaction leads to the accumulation of the charged particles from the surrounding plasma on the spacecraft surface which leads to the surface charging and extending electrostatic fields into the space. This results in surface arc charging causing contamination and degradation of the spacecraft surface and sensors. The contamination modifies the thermal, optical and surface properties. Perturbing the ambient environment, waves and other plasma instabilities are excited in the plasma environment. These waves when interact with surrounding environment uncover boundless information about the plasma medium. Plasma wake structures are generated behind the spacecraft with its interaction with flowing plasma. The spacecraft surface at high potential interact with ions and neutrals leading to chemical reactions with degradation and surface sputtering. Simulating an environment with ionospheric plasma condition in the laboratory would help in calibrating future rocket based ion and electron detectors.

Experimental studies on dusty plasma flow past an obstacle

A dusty (or complex) plasma is composed of electrons, ions and a neutral background with additional micron to nanometer sized charged components in it. Dust, when exposed to the plasma environment, immediately become charged by collecting electrons and ions. Laboratory study of such charged dust particles in plasma, has introduced a great variety of new phenomena associated with waves and instabilities and has also provided a number of interesting dynamical structures such as voids, vortices, Mach cones etc. 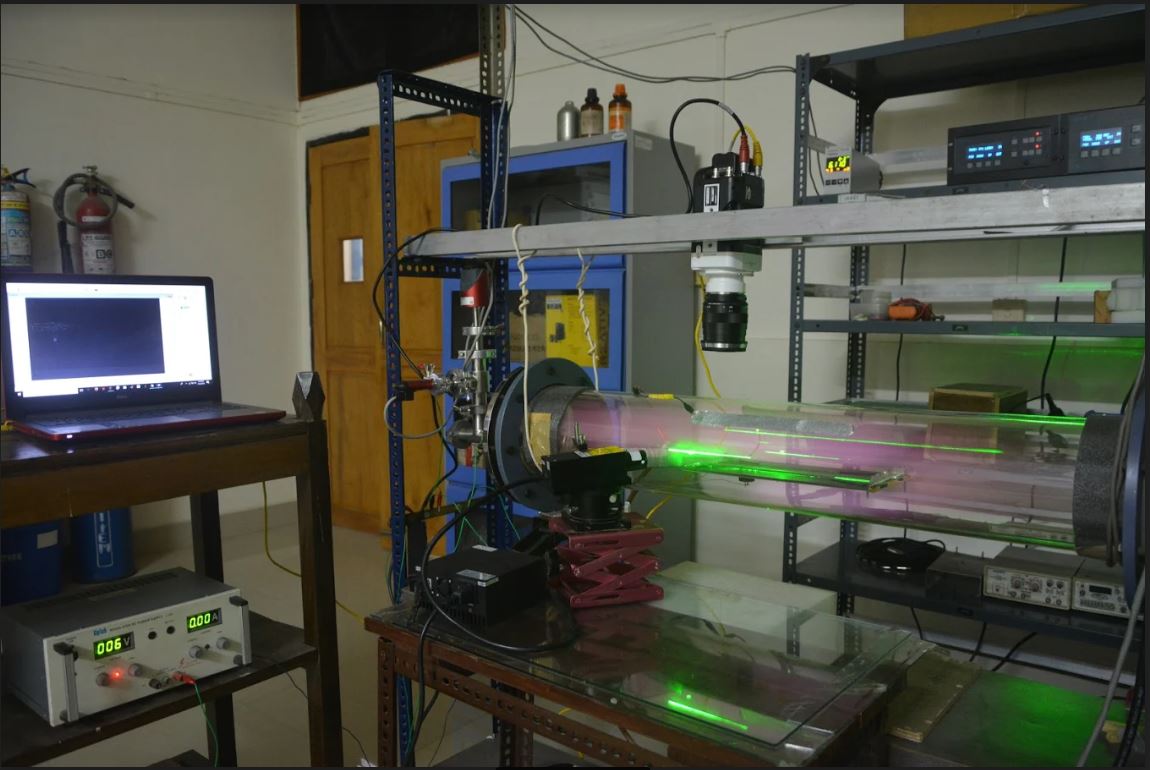 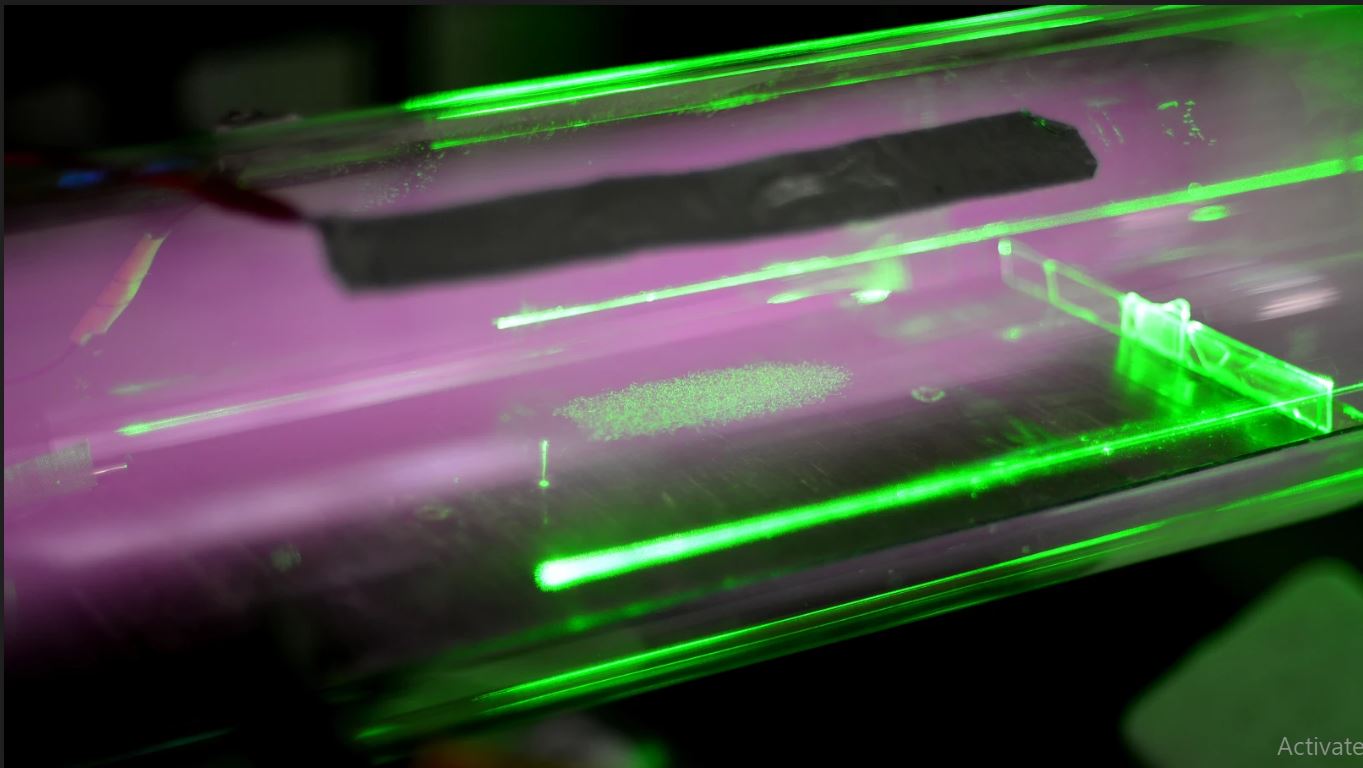 The medium of normal electron-ion plasma containing nanometer size dust particles is commonly known as nanodusty plasma. Nano dusty plasma is observed in many astrophysical environments such as cometary tails as well as in laboratory condition such as fusion reactor and semiconductor processing devices. The presence of nano dust not only modifies the usual dusty plasma processes involving micron dust such as dust charging, wave generation etc. but also shifts the parameter domain of the collective dust dynamics. 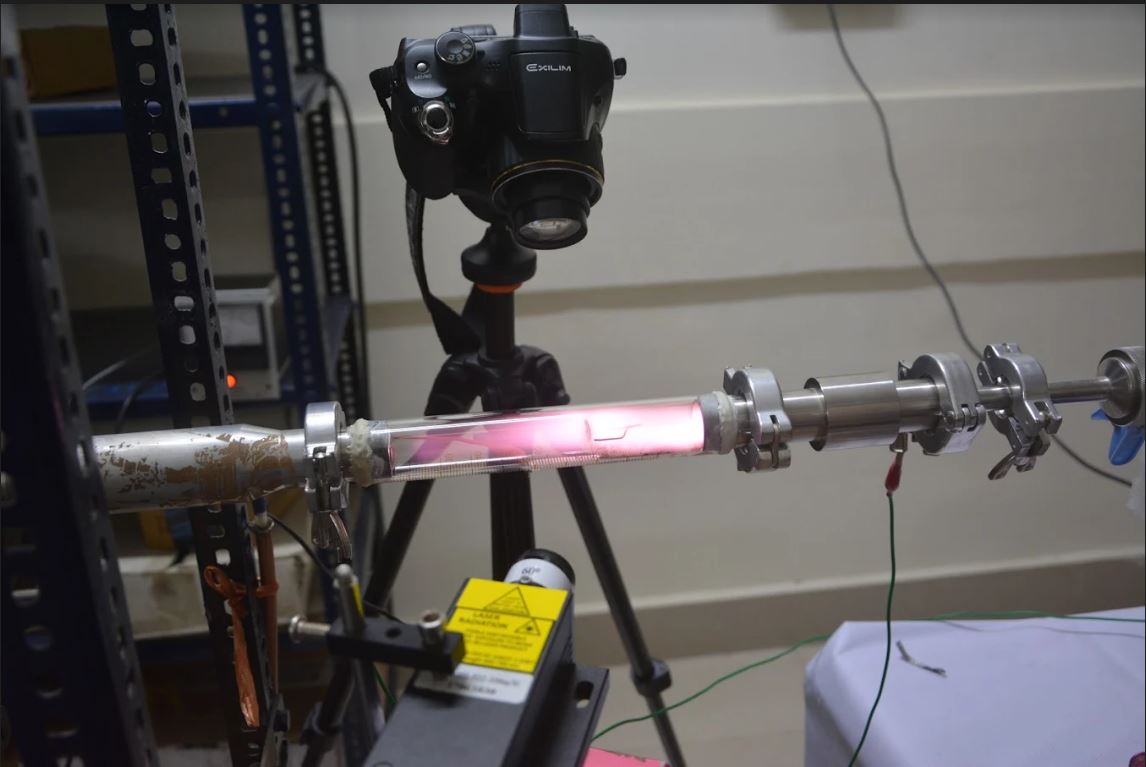 In situ production of nanodusty plasma

Low temperature laboratory plasma plays a significant role in producing nanoparticles, metal oxides and nano-composites using different types of reactive gases. In most of the laboratory discharges, nanodusty plasma (i.e. plasma containing nanometer size particles) is produced either by introducing particles externally or by growing them inside the plasma. Plasmas containing nanoparticles are widely used and proposed in plasma technological applications for production of nanomaterial, metal oxides and surface deposition. They also provide the scope to study interstellar environments in laboratory. 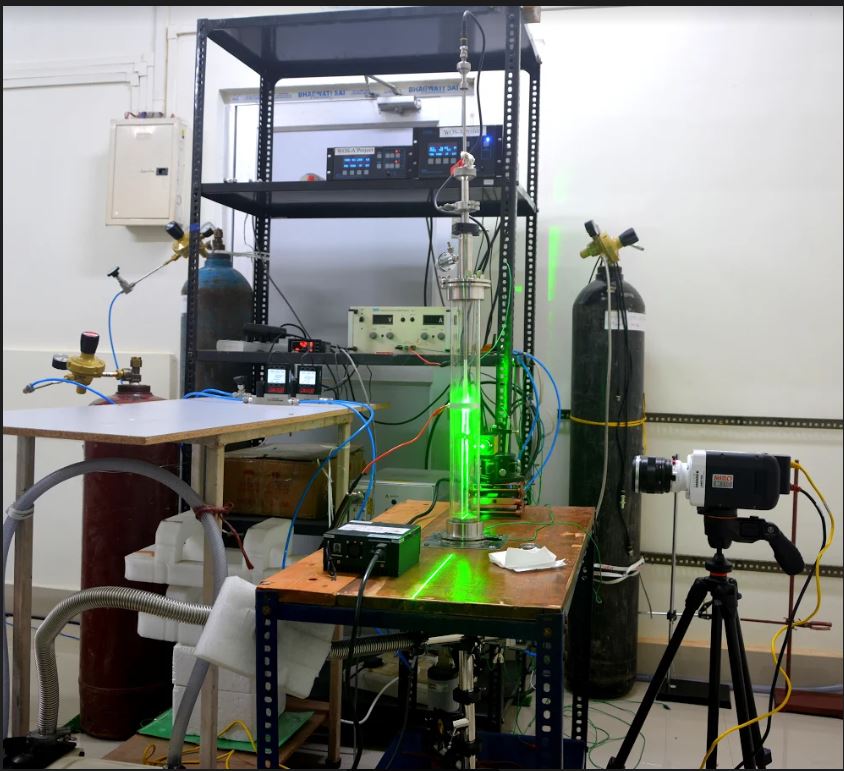 In the recent years, non-thermal atmospheric pressure plasma jet (APPJ) devices attracted significant attention due to their great potential for a variety of material processing and biomedical applications. In this type of non-thermal plasmas, the highly reactive chemical and charged species, metastable atoms and UV photons are generated by the high energetic electrons. These highly reactive species play the dominant role in surface modifications and helps the chemical reactions to occur at a lower temperature than the conventional methods. 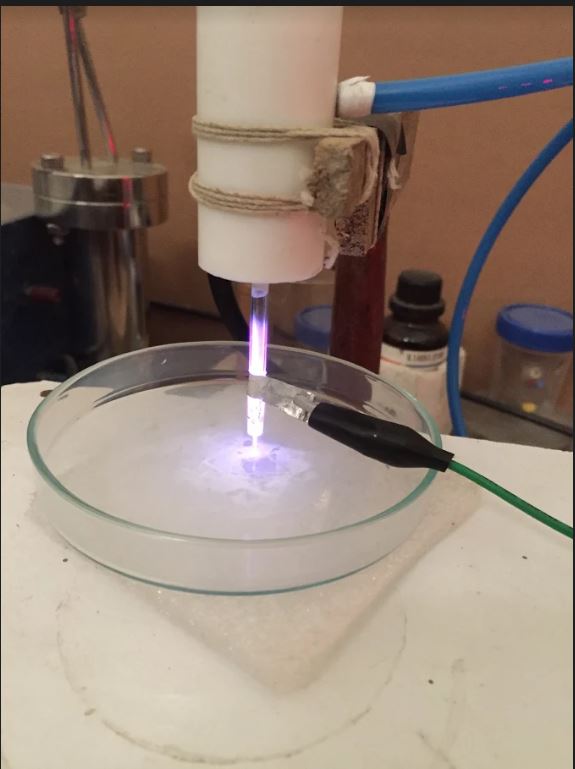 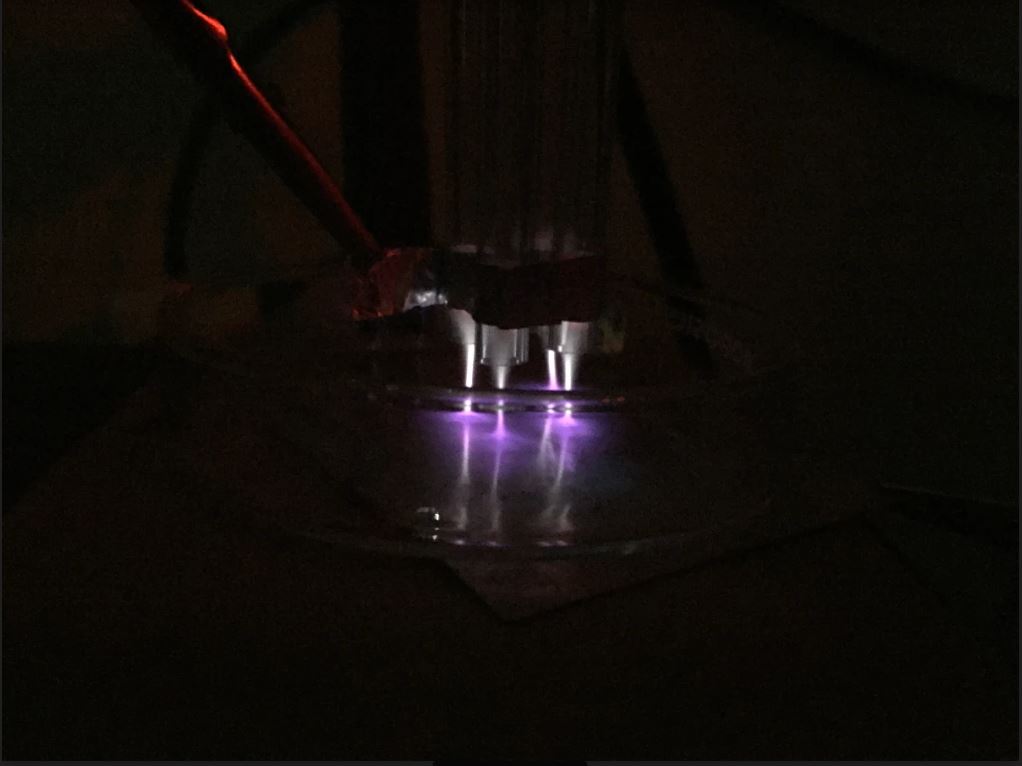 In this area, investigation of the plasma discharge both In and Above liquid have been carried out. A wide range of applications such as water treatment, nanomaterial synthesis etc. in PLIs are possible mainly due to the generation of various reactive species, UV radiations and shock waves in the plasma-liquid interface as well as inside the liquid. These methods give the flexibility in changing both the physical (plasma parameters) and chemical (liquid parameters) properties for the synthesis of desired nanomaterial. 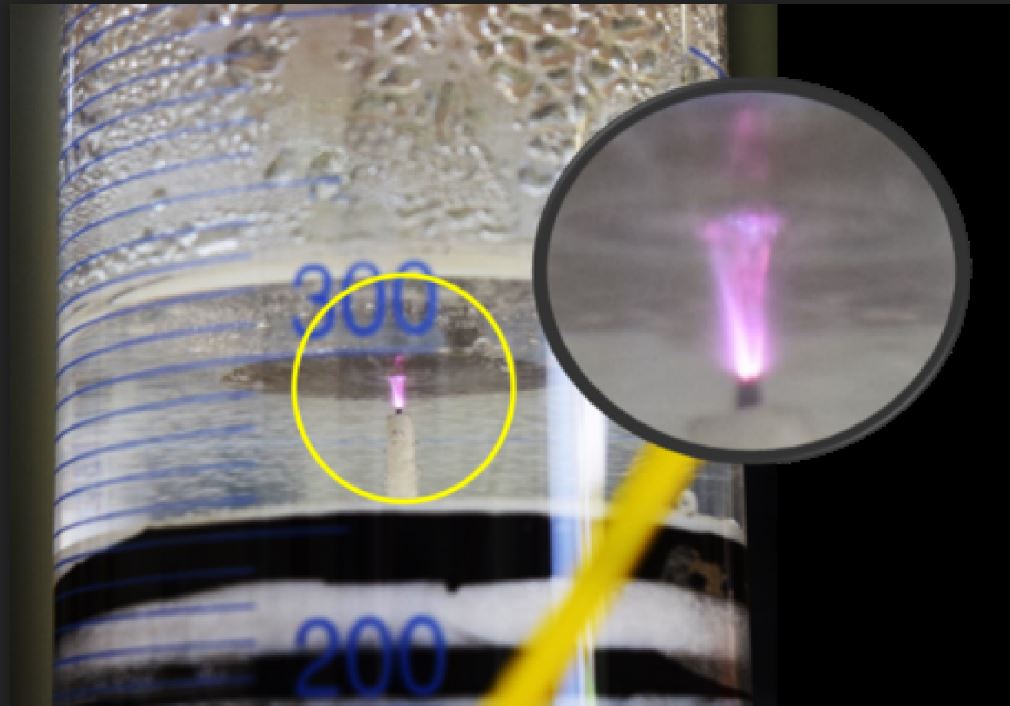 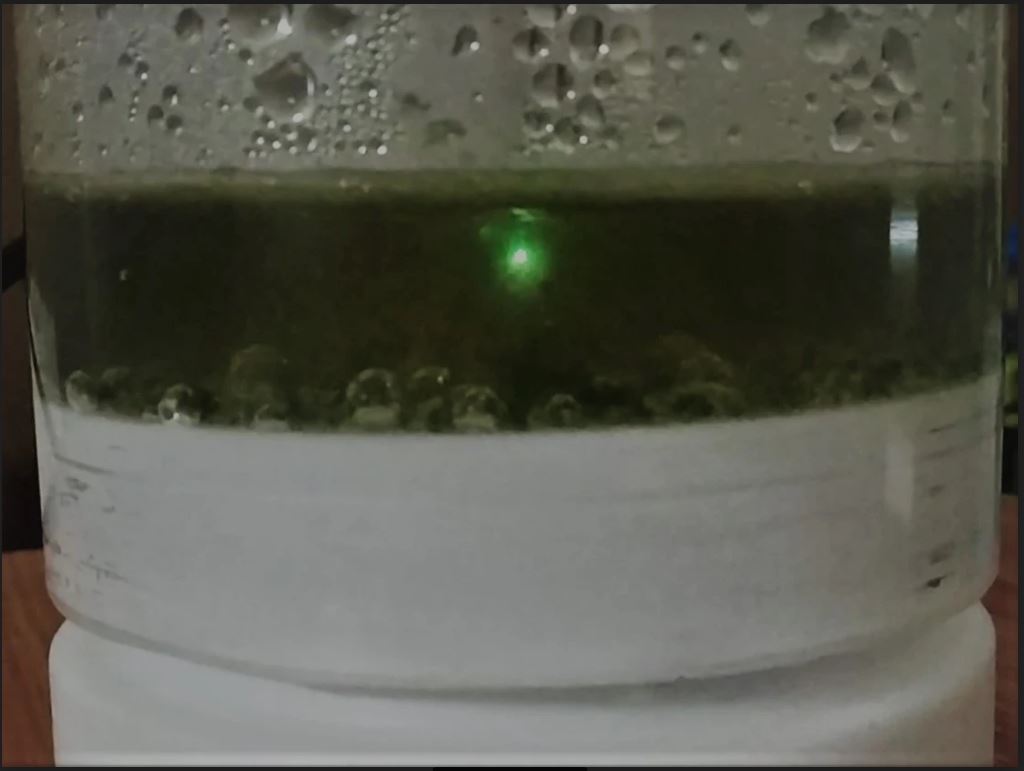 Fuel cells (FCs) are clean, efficient and sustainable energy source that produces electricity from fuels by electrochemical reactions. Among different types of fuel cells, PEM fuel cell has great advantage and is seen as a promising energy source for future use in transportation, weather stations, portable and stationary applications. But the cost of the most suitable and widely used Pt (platinum) catalyst is one of the main barriers in mass production of PEM fuel cell. Research efforts are being carried out to develop Pt – based alloy catalyst to minimize the use of Pt catalyst. 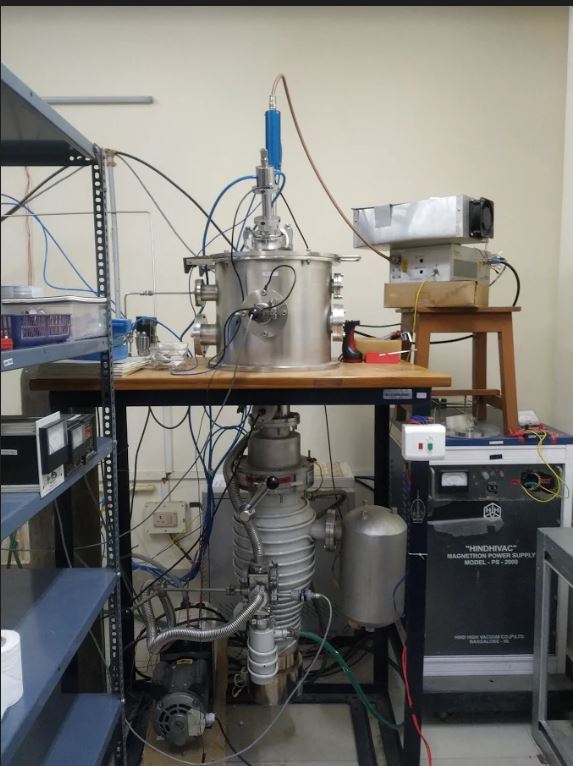 Other administrative and academic responsibilities: