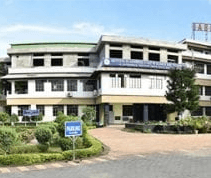 Institute of Advanced Study in Science and Technology (IASST) is a premier scientific research organization in the north-east region, conceived and nurtured by the Assam Science Society in its initial years and was inaugurated by Nobel Laureate Dorothy C. Hodgkin on 3rd November 1979. Subsequently, it was supported by the state govt. as its only autonomous R&D institute till March 2009. The institute was taken over in March, 2009 by the Ministry of Science and Technology, Govt of India as one of its autonomous R&D institute.