Latest News :
Celebration of International day of women and girls in science at IASSTSuperannuation of Mr. Suresh SarmaCelebration of World Cancer Day 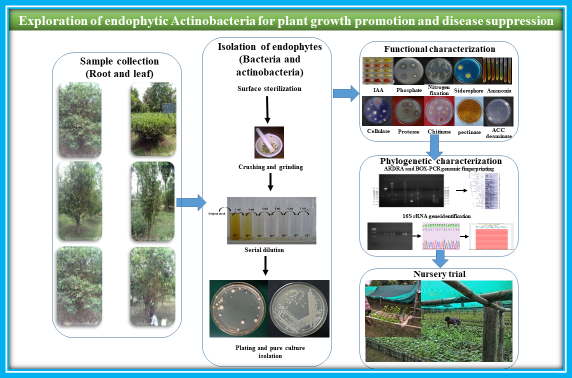 Tea (Camellia sinensis) plays an important role in the Indian economy as a major portion of the tea produced is exported. However, in the recent years, due to higher demand of chemical residue free made tea by the importing countries has led to a decline in the export of tea. Plant associated microorganisms may contribute to plant growth and defence by direct or indirect methods. Our study attempts the use of tea associated microorganisms having plant beneficial characteristics to reduce/replace the use of chemical inputs in the tea industry. We have isolated 46 endophytic Actinobacteria associated with Camellia spp. and related genera, Eurya based on morphological characteristics of the isolates. Most of the endophytic actinobacteria isolates having antifungal activity were positive for the presence of chitinase, NRPS (Non-ribosomal peptides synthetase) or PKS-1 (Polyketide Synthase) gene, suggesting the presence of distinctive mechanisms to inhibit the growth of pathogenic plant fungi. Actinobacterial strain SA1, T1LA3, and SA14 were further tested for their efficacy in promoting the growth of commercial tea clones namely, TV1, TV9, TV18, and TV22 in nursery conditions. All the endophytic isolates tested showed significant differences in terms of plant growth-promoting parameters in the treated plants compared to untreated control. This research finding confirms that endophytic actinobacteria have the potential to exhibit multiple growth-promoting traits such as IAA production, phosphate solubilization, siderophore production and so on that positively influence tea growth and production and can hence be used in the management and sustainability of Tea crop. The above mentioned work is published in Frontiers in Microbiology, 2020, 11: 318. doi: 10.3389/fmicb.2020.00318; authors: Atlanta Borah and Debajit Thakur