The Institute of Advanced Study in Science and Technology (IASST), Guwahati (an autonomous institute under the Department of Science and Technology, Government of India), has celebrated the International Day for the Preservation of Ozone Layer on 16th September 2021 under the banner of 75th Year of India’s Independence-“Azadi Ke Amrit Mahotsava”. IASST is celebrating the 75th year of our Independence Day, Azadi Ka Amrut Mahostav by organizing various event throughout the years. The program’s theme was “Montreal Protocols- Keeping us, our food, vaccines cool”. Keeping in mind the recent COVID pandemic situation, the celebration was conducted on a virtual zoom platform. Prof. B. N. Goswami, SERB Distinguished Fellow and an eminent scientist in the field of meteorology and climatology, has delivered a talk entitled “The Ozone Hole & the Success of the Montreal Protocol: Challenges ahead & contrast with the Paris Agreement”. Prof. Goswami previously was also served as a Director of the Indian Institute of Tropical Meteorology. Due to the Cvoid-19 pandemic, the programme was observed by using the online digital platform. The faculty members, research scholars, post-docs and other staff members of IASST attended the program and participated in the talk. Prof. Goswami has explained details about the ozone layer, how it protects our planet from UV radiation, depletion of the Ozone layer in the Antarctic region, Montreal protocol and its success in recovering the ozone layer. In the end, Prof. Goswami compares the Montreal protocol with the Paris agreement on climate change. Overall, the program will help to spread scientific awareness among the participants of the program. 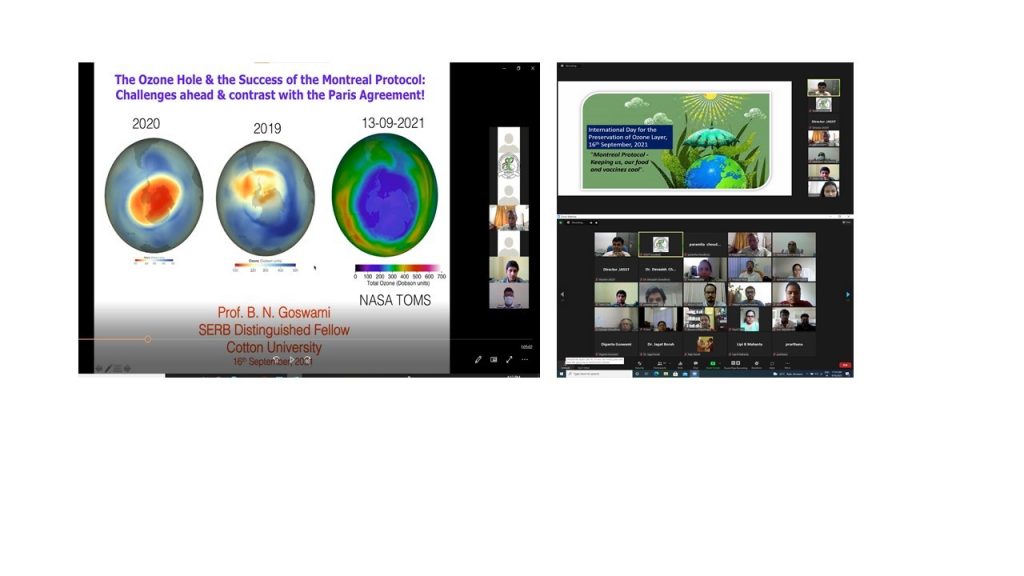