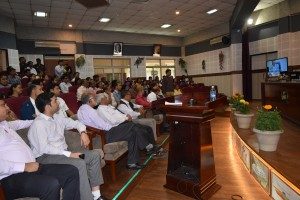 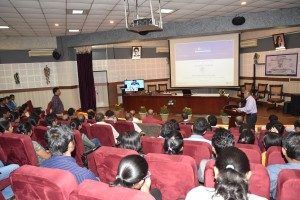 In line with the Prime Minister’s vision for a DIGITAL INDIA, dream of a Digital India where the Government is open and Governance transparent, the eOffice initiative of the National Informatics Centre of Ministry of Information Technology, Government of India is a tool to make this vision of a transparent governance come true. To realise a transparent governance and speedy discharge of all official works the Institute of Advanced Study in Science and Technology (IASST) is implementing the eOffice at IASST with the help of the eOffice Project Division, National Informatics Center (NIC), Government of India.

In the history of IASST, 9th March is a very important day since on that day IASST was taken over by the Department of Science and Technology (DST), Government of India in 2009 as one of it’s autonomous institutes.

On 9th March 2017 eOffice of IASST was inaugurated by Prof. Ashutosh Sharma, Secretary, DST, Government of India through video conference.

The inauguration programme started with the welcome address by Dr. N. C. Talukdar, Director, IASST followed by a brief presentation by Mr. Manish Sharma, eOffice Project Manager. Subsequently, eOffice of IASST was inaugurated by Prof. Ashutosh Sharma, Secretary, DST. After the inauguration, Prof. Ashutosh Sharma addressed the meeting. In his address, Prof. Sharma mentioned that he is happy to see one of the youngest members of the DST autonomous bodies, IASST, has taken the initiative to embrace the vision of transparent governance in the true sense by implementing paperless office application. He further said, Director, IASST may share his experiences with other DST institutes on using the eOffice, so that other autonomous institutes can follow. He emphasized that proper care should be taken while digitizing the legacy documents. Finally, he congratulated IASST family for successfully taking this initiative forward and expressed his best wishes for a successful implementation.

The meeting ended with vote of thanks from Dr. Diganta Goswami, Registrar, IASST.