Latest News :
One-Day National Symposium on snake and scorpion envenomation and therapy: National and international perspectives” at IASST, Guwahati to celebrate the “World Snake Day” on 16th July, 2022Personal interview for Institutional-JRF admission, August 2022 session for against the advt. No. 337 dated 11/04/2022Shortlisted and not shortlisted candidates against the advertisement No.-342 dated 25/04/2022

The present era of sustainable research is mainly focussed on the development of suitable alternatives for plastic films. In this venture, biodegradable protein films are found to be the most promising candidate as a replacement of conventional plastic films. In the recent past, several modifications of these protein films via suitable heteroprotein complexes were reported by different research groups. Applications of such protein complexes are found in the development of wide variety of protein–based drugs, encapsulation of various bioactive compounds, cosmetic additives and so on. Also, these protein complexes can be used as biodegradable films, meat analogues, fat replacer, etc. In this aspect, biodegradable thin films of heteroprotein complex consisting of two globular proteins namely bovine serum albumin (BSA) and lysozyme (Lys) were successfully reported by a research group from IASST led by Dr. Sarathi Kundu, Associate Professor and Mr. Raktim J. Sarmah, SRF, a Ph.D student. On the contrary to the study of the bulk protein complexes, this work offers an in–depth idea about the different structures, morphologies and domains of the complex biofilms at variable pH conditions formed on both water and solid surfaces. In this study, the most stable and thicker film was reported at pH around 9.2 having maximum complex formation. This unique pH value is located in between the isoelectric points of BSA and Lys. Therefore, the results obtained from this study can pave the way for fabricating thin films of different protein complexes for expanding its applications in the area of thin film technology. This work was recently published in the journal of Food Hydrocolloids under reputed Elsevier publishers with an impact factor of 9.147. 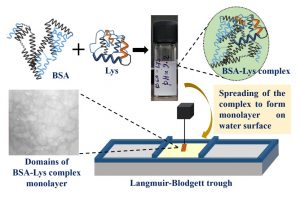